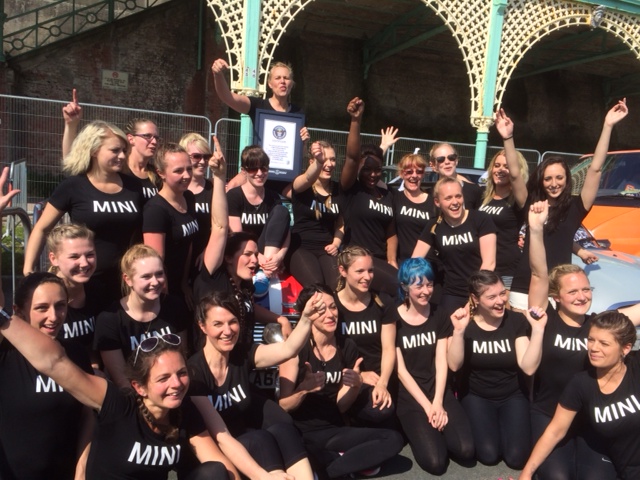 A group of 27 local ladies, including Sales & Marketing Consultant Juliette Hay, have just broken a World Record by squeezing into a Classic Mini.

Juliette, (pictured in the bottom row, 2nd from left) who works closely with The Park Lane Group, took part in the feat to raise awareness for Sports Connections Foundation – an amazing charity which helps underprivileged children realise their sporting potential and dreams which may not have been otherwise possible due to health, environmental or family difficulties.

The breathtaking stunt took place in Brighton as part of the London to Brighton Mini Rally in May this year and adds to another World Record held by the group for getting 28 girls into the new model Mini.

Both scary record attempts require lots of guts and determination, being difficult and potentially dangerous. Two paramedics were on standby to give oxygen and administer first aid to anyone requiring urgent treatment but they were lucky on both attempts with only a few girls requiring oxygen and just one broken finger.

Guinness World Record rules state that all participants must be at least five feet tall and over 18 years old. Most of the girls were under a size ten dress size which helped them achieve the record.

Juliette said being in the car was one of the scariest feelings:

“We had a code word ‘Pudsey’ which could be used if you were hurt and needed to get out quickly. You certainly wouldn’t go in there if you suffered from claustrophobia; there is no air and no space at all. Girls were squeezed into foot wells, the boot, and along the dashboard. Being one of the first into the car and onto the back seat, I had to sit and bear the crush for 15 minutes. But to be able to say that I hold two current World Records with an amazing group of girls makes it all worthwhile.  Not many people can say that.”

To see the footage of the record http://youtu.be/YDx3z4BGsbU