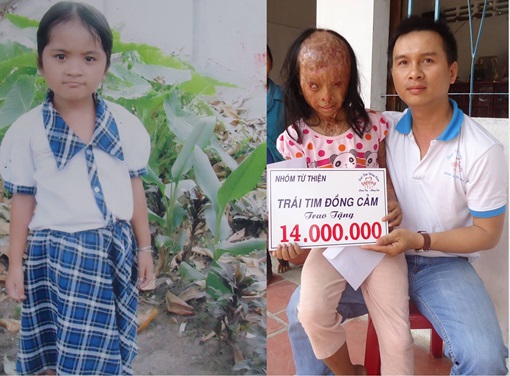 Following our first news post bringing news of young Nhi Yen in Vietnam who suffered an acid attack aged just 6, we’re pleased to confirm Nhi has since had an operation as a result of Wendy’s fundraising:

At the end of May 2015 – Wendy returned to Vietnam to visit Nhi and her family where they live on the edge of the Mekong Delta.

Following The Park Lane Group’s donation and Wendy’s huge efforts to raise funds, Nhi underwent a successful operation to ease the pain and infections she suffered from. The operation, whilst not making cosmetic change, has meant Nhi can now breathe normally. At the time of going into hospital, the Doctors advised Wendy that her head and eye had become infected as a result of a lack of care and difficult living conditions including a lack of safe clean drinking water.

According to Wendy, “I am so grateful for your generosity and kindness [The Park Lane Group]. The money raised covered this vital neck operation and will mean Nhi can undergo an arm operation, but as she continues to grow she will need further operations. I am hoping that the charity ‘Facing the World’ will support Nhi in making a trip to the UK for further medical treatment and I have promised the charity that I will do some further fundraising for them… a Tough Mudder Challenge.”

Posted April 14: 2015 – We’ve got behind the moving story of young Nhi Yen who, now aged 10, is dealing with the lasting effects of an acid attack. She is pictured here on the left before her ordeal when she was just 6, and after.

Nhi came to the attention of Wendy Vu last year. Wendy, a beautician from Rye who is originally from Vietnam, made the decision to visit Nhi whilst holidaying in Saigon last year.

“I was so struck by the story of this brave little girl I just had to do something. A local Vietnamese charity ‘Trai Tim Dong Cam’ has done much to support her and her family but she now has no further after-care. Whilst her body grows her scars don’t causing her extensive pain and severely restricting her movement. She has also lost the sight in one eye completely and has just 20% vision in the other eye.

“Since all medical intervention is paid for in Vietnam there’s a desperate need to raise funds to help Nhi have further operations and get the care she needs, so I’ve set about doing just that.”

With cake sales, raffles, sponsorship to run the Hastings Half Marathon and more, Wendy has now raised £1300 and The Park Lane Group is funding the £700 balance needed for an operation on her neck which will help deal with the tightening of the scar tissue on her neck.

Wendy will be travelling out to Vietnam herself in May to hand over the funds raised for Nhi directly to the hospital and surgeon and has plans to continue fundraising to provide further  support for young Nhi.