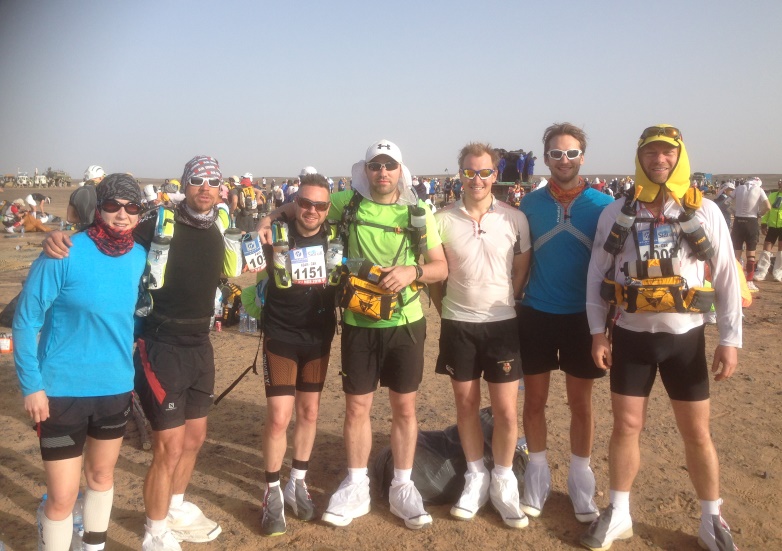 The Marathon Des Sables (MdS) is world renowned for being ‘the toughest foot race on earth’.

When we heard this was to be Dain Jensen’s next challenge to raise money for the Hastings Sierra Leone Friendship Link, we’ll admit to being sceptical as to whether he could complete it. Time for The Park Lane Group to dig deep and commit to a sizeable sponsorship sum for this great local charity in recognition of the huge undertaking Dain was making!

The Marathon
This notorious multi-stage foot race is the equivalent of running six marathons in six days.

Taking place in the Sahara Desert, entrants are subjected to extreme conditions and sweltering temperatures as they take on sand dunes as high as the Downs and thousand metre mountains, all whilst carrying their food and essentials on their backs.

Notoriously difficult, dozens of people pull out in the first stage alone.

Dain, of Kileys Karpets in St. Leonards, however, is determined and courageous. With careful planning and a rigorous daily training schedule which included 50km+ runs on weekends and workouts in Brighton University’s heat chamber in temperatures rising to 50 deg C, he prepared mentally and physically and conquered the epic 2016 marathon.

According to Dain, “The experience and the highs out-weighed the lows. The stunning scenery and running alone at night under a sea of stars with nothing but the crickets, moths and your thoughts for company are something I shall not forget.

“There were also humbling moments, like seeing Duncan Slater, a double amputee, cross the line after 84 kilometres on his prosthetic legs and crutches!! I can highly recommend it, so long as you’re not someone who’s worried about living in a sandstorm and not washing for a week!!”

The Charity
Dain, who participated with friend and co-runner Adam Slater, has raised over £4,600 so far for the Hastings Sierra Leone Friendship Link.

The charity was primarily set up to promote links between the towns of Hastings in East Sussex and Hastings in Sierra Leone to help with reconstruction following the catastrophic civil war in the 1990s. It is now providing vital support and funding for the local health centre which cares for over 20,000 people in an area ravished by the Ebola virus and which has one of the highest infant mortality rates in the world.

You can find out more about the Hastings Sierra Leone Friendship Link here.

And sponsorship is still being collected – simply go to Dain’s fundraising page to add your support.

To learn more about the MdS visit www.marathondessables.co.uk. The dunes of The Marathon des Sables Dain at the finish of The Marathon des Sables