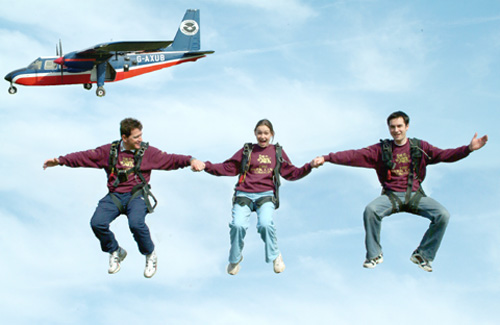 Everyone at Park Lane was shocked by the devastation caused by the Asian tsunami on Boxing Day 2004. The Park Lane Group decided to attempt a sponsored parachute jump to help raise funds together with Claremont School. It was an interesting idea as Managing Director, Russell Beswick, has a fear of heights and Scott Baker, dreads flying.  It meant they were both facing their greatest nightmares, so as a marketing ploy to gain maximum sponsorship they called themselves ‘The Flying Cowards’.  A third coward was needed to make up the team who, because of weight restrictions, had to be pretty light.  Mark Beaumont, Principal and owner of the Claremont School, put his daughter Emma forward and ‘The Flying Cowards’ were ready, if not a little apprehensive!

It was decided the monies raised would go towards the total Claremont pot to fund the re-build project of a school that was completely demolished in Phuket.

The Flying Cowards completed a full day’s intensive training with theory and practical tasks followed by a written test. After several abortive attempts, the weather conditions were perfect on 19th April and the jump finally took place.  They will never forget this life changing experience.

A total of £6,000 was raised from Park Lane. The grand total, including all the other funds raised through events at the school, topped £20,000 for the construction of the school in Phuket.